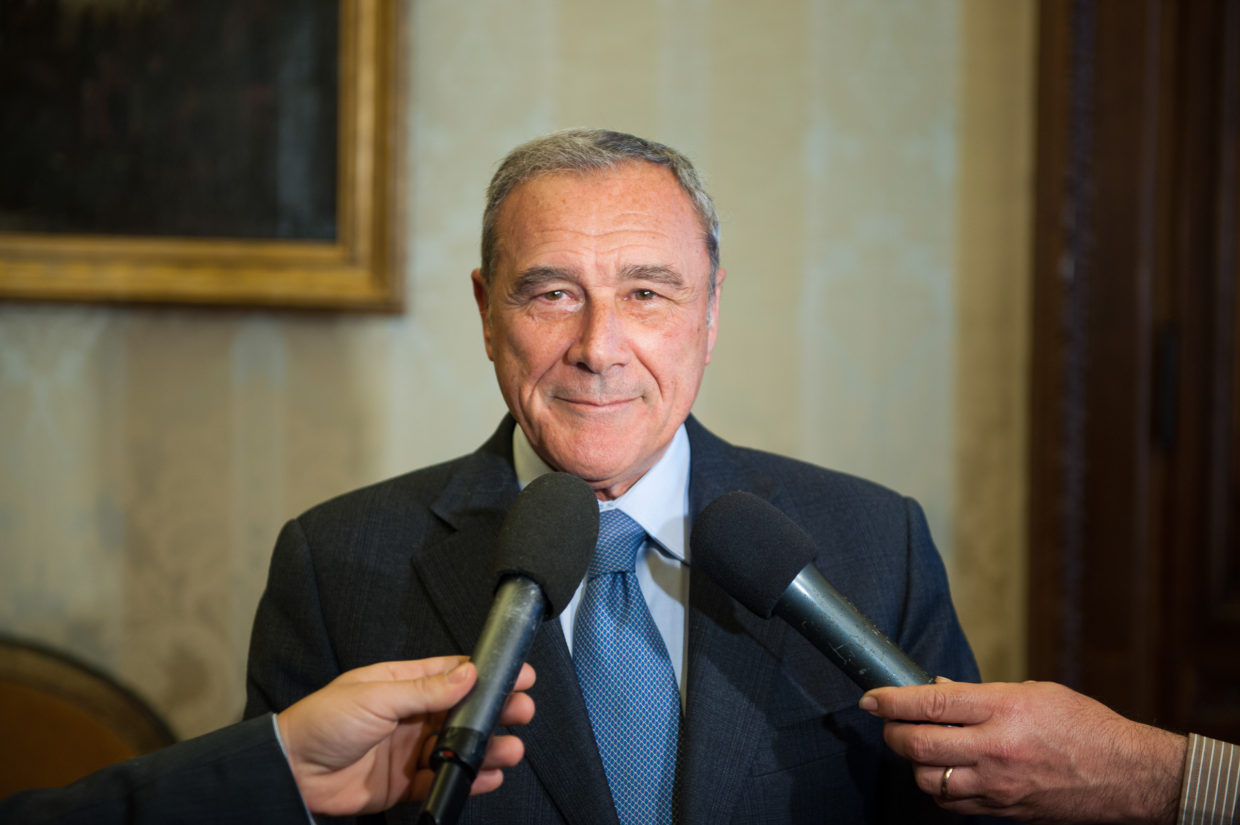 Pietro Grasso has for 43 years been one of the top men of law fighting the Mafia in Italy, at a time when corruption was a way of life, not only in social and economic but also in political areas. In the massive 1986-89 operation against the Sicilian mafia, in which Grasso played his first big anti-corruption role, 475 Mafioso were prosecuted and 19 life sentences were handed out. In 1999, as the chief prosecutor in Palermo, another 380 life sentences were given to Mafia members. In 2005, his appointment as the chief anti-Mafia prosecutor created a row within the Silvio Berlusconi government, but he took on the job after a ruling by the Constitutional Court. In 2006, thanks to his investigations, Bernardo Provenzano, the infamous Mafia “father,” was caught on his farm in Corleone after being on the run for 53 years. Grasso got into politics in the March 2013 elections on the Democratic Party list, and was elected as the president of the Senate, the number two position in the Italian system. One of the first actions he took under his new title was to be among the initiators of a new anti-corruption law, to curb the Mafia’s influence on politics. Grasso was among the key note speakers of the World Forum on Governance in Prague on April 9-11, with a theme of fighting against corruption. The Italian Senate president delivered an impressive lecture on crime and corruption and how politics could lead the way in the fight against it. At the forum, I asked him whether he was following the corruption claims in Turkey, in which a number of politicians and businessmen are accused. “As you’re aware,” Grasso began, “For the last year I’ve not been directly involved in the fight against corruption. I’m the president of the Senate now, not a prosecutor anymore.”

The audience thought he was avoiding giving an answer, perhaps because of his new political title, but Grasso said “but” with a little pause and a smile on his face, and continued as follows: “From what I know, no more than press reports, I’m not surprised that these cases of corruption in Turkey have emerged.” Again after a little pause: “I can say that corruption became visible; and also that there is an equally visible crackdown, not on corruption but on those who reported corruption.”

It was clear that Grasso has been following the developments in Turkey closely enough to be aware that a number of judges, prosecutors and police officers have been removed from their posts, accused by Prime Minister Tayyip Erdoğan of being in a plot against himself. Grasso had something to say on this as well, without mentioning any names: “The way to fight corruption cannot be to get rid of those who fight against corruption.”

It was also clear that he was aware that Erdoğan had managed to win the local elections despite all the corruption allegations, evident from the following sentences that had gave with a striking example:  “Even if the people actually agree with the way it has been handled and give their consent, let us not forget that people are not always right. Let us not forget that between Barabbas and Jesus, the people chose Barabbas”.

Why is it not a surprise for Grasso that corruption cases in Turkey have emerged? Was there any particular expectation that it could come soon? Grasso’s answer said there was nothing particular:  “This is not something particular to Turkey, it is valid for every country. What I say about it not being a surprise for me is not based on any particular information, but due to the general flow of developments. I hope Turkey will find a way to fight corruption; I hope Turkey will be in closer relations with the European Union.” Grasso also underlined that transnational crime “closely links corruption, trafficking, tax evasion and illegality in general.” He particularly singled out the “owner identity protection” banking system in Europe and the United States as being a part of the problem and attributed a major role to politicians acting with political ethics.